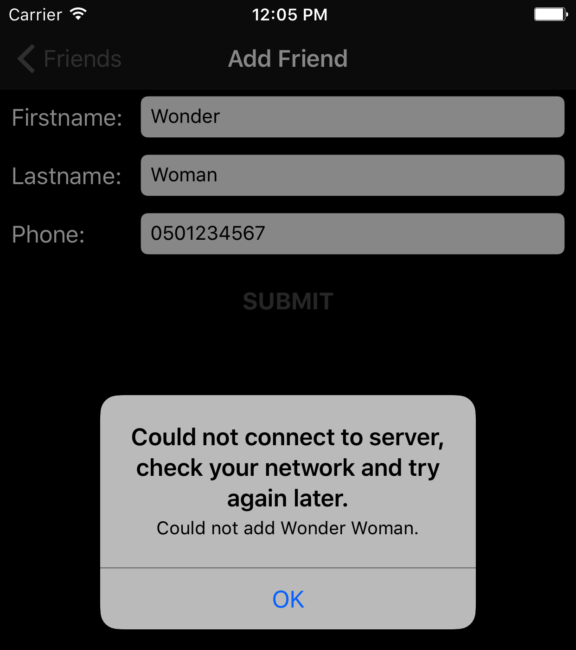 A simple example, about an action that occurs in many of the viewcontrollers, is an error popup note. Often your views are fetching or posting information to a server, and sometimes that interaction fails. Usually in this case, you provide information about the failure to the user using a popup.

I’ll use the Friend project as a base for this example, so if you want, you can get the complete source code the example from github. Friend application is a mobile app, which allows you to download, add, edit and delete information about your trusted friendlist, which is stored on server. It has a view for listing all the friends from the server, and another view for adding and editing friends information. For more information about the application you can read this blog post.

Above, you can see the code that creates the AlertController and then uses viewcontrollers present function to make it visible. The fact that both of the viewcontrollers implement this peace of code, violates against the DRY-princible (Don’t Repeat Yourself), so we need to do something about it. Easiest way to fix this, is to define an extension for UIViewController, which then implements these lines.

Let’s create an UIViewController extension which defines a function called presentSingleButtonAlert(alert: SingleButtonAlert). Inside the function, we’ll put the exact same lines of code that are now used in the viewcontroller:

The code inside the UIViewControllerExtension file

Incase you are wondering what the SingleButtonAlert is, it is explained in my previous post in here.

Since presentSingleButtonDialog is defined inside an UIViewController extension, it is now available for all the viewcontrollers through the project. Where ever we used the alert dialog code, we can replace it with the function call. This is what it looks like in the FriendsTableViewController:

Presenting the alert after ViewController extension is used

So, we went from 7 lines of code to 1 line of code and incase your project is a lot bigger than Friend project, which it most probably is, you’ll save a lot more lines. At the same time the code becomes easier to maintain. If you need to change the AlertController code, you now only need to do it in one place!

Now this is all very good, but you might not want presentSingleButtonDialog to be automatically available for all your viewcontrollers. Some of them might not need to present dialog. A better way is to define a protocol and make your viewcontroller conform to that protocol.

Next, we can create an extension for the protocol and make sure that it is only available for UIViewControllers:

Since the default implementation is defined inside the extension, we only have to state in one line that FriendsTableViewController conforms to it, and the function is available.

This was only one simple example, about how to define protocol extension for viewcontroller, but I am sure you will find a lot more use cases where to apply the same technique. Thank you for reading and have a great day my friend!