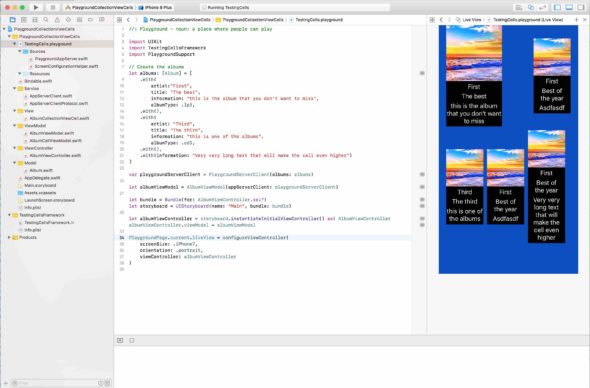 Today I want to talk to you about Swift playgrounds! In the last post I showed you how you can run your entire application inside swift playgrounds. It really was fun to get it running, but I am not sure if it helps that much with the development work. I really wanted to see if playground can help with UI development.

So in this blog post I’ll show you how to load specific view from storyboard in playground, replace the network layer with static data and quickly test the view in different resolutions and orientations. To achieve this I’ll use the techniques from previous post to load the view in playground, and protocols and dependency injection to provide whatever data I want to test with to the view.

To cover all this I created an example application PlaygroundCollectionViewCells. The application shows dynamic size collection view cells which represents albums. Those albums can be two different sizes: cd and lp. The cells also have dynamic height since the text length differs between the albums. The project does not make real network requests, but it has a dummy network layer to simulate how the data would be fetched.

The project is on GitHub so you can get it from there. But you can just follow this post since I cover the most important parts here. 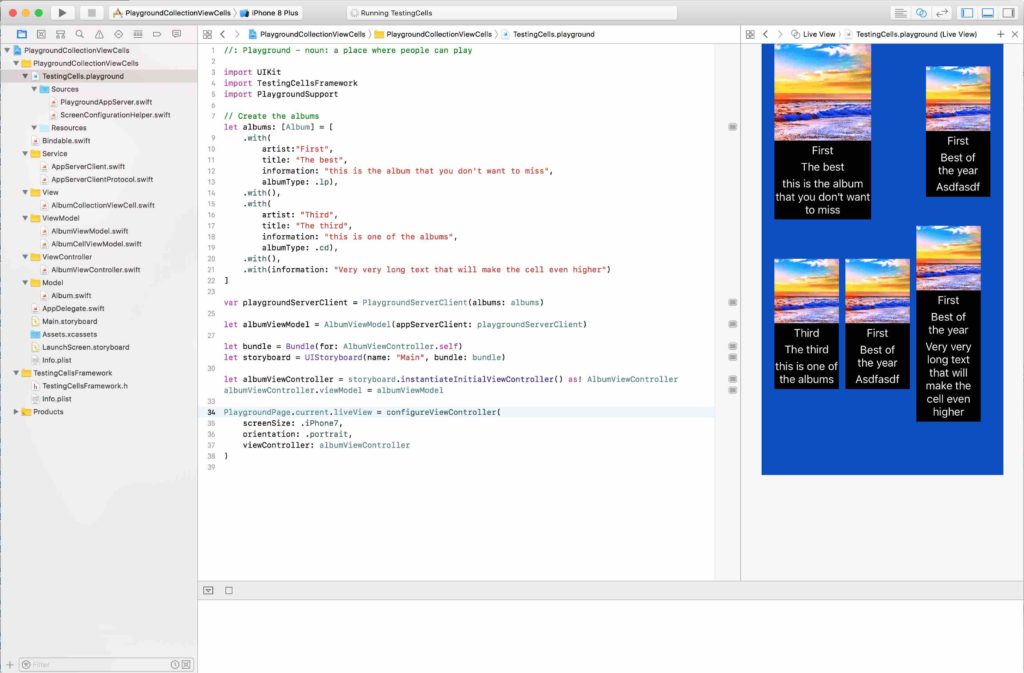 Quick review of the project

PlaygroundCollectionViewCells is built using MVVM pattern. This means that it has ViewModel object between the Model and the View, which prepares the data for the view. In case you want to learn everything you need to know about the MVVM pattern, checkout my tutorial MVVM pattern with Swift application.

The core functionality is in these objects:

On top of those you can also find AlbumCellViewModel and AlbumCollectionViewCell which handles the cells inside the AlbumViewControllers collection view.

Album is just the model that has all the information that album has:

Album type tells whether album is a cd or lp which eventually affects the cell size.

Album also has a helper extension which helps this example app to provide content to the screen:

With the extension you can create data by calling Album.with() which creates a single album with the default values provided in the function.

AlbumViewModel is a struct that prepares the data for the view controller.

It stores the AlbumCellViewModels inside cells array. These are used to create the UITableViewCells for the UICollectionView in the view controller. It also has an instance of AppServerClient which can be injected to the struct. On top of that the module also has getAlbums() function which is used to get the album content.

Bindable is used here to bind the cell values to the view. Whenever the value changes, view is notified and it reloads the cells. Bindable is also covered in more detail in the MVVM blog post series in this same site.

AppServerClient handles all the network requests. It actually does not make any real request since I don’t have a backend running that would provide this kind of data.

It uses the Album.with() function to create album data and the return it in the success block. AppServerClient conforms to AppServerClientProtocol which is a protocol that defines the networking interface.

We want to use the protocol so that another object can be used to replace the actual implementation in the view model in unit testing. Or as in this case when we use swift playgrounds to test the UI. Another benefit here is that we don’t have to include AppServerClient.swift file to the frameworks target when running the project in playground.

AlbumViewController is where most of the magic happens. It starts to listen the changes in the view model using Bindable and creates the cells for the UICollectionView according to data provided.

Notice that all the functions from the view controller interface are mark as public. As I explained in the previous post, how to run your application in swift playground, you need to define all the functions that are used through the framework to public. In a nutshell view controller starts to load the album data in viewDidLoad and when it receives info in the bindViewModel() viewModel?.cells.bindAndFire function it tells the collection view to reload it’s data. After that the cells are created and presented on the screen. The project has 2 different cell sizes defined in the storyboard so depending on the cellSize attribute, different identifier is used to select the correct cell for the correct album type.

I won’t go through the AlbumCollectionViewCell and AlbumCellViewModel implementations since those are pretty straight forward. Please ask me if there is something that is unclear when you browse through the code.

So this is the core functionality and when you run the project in the simulator it looks like this. 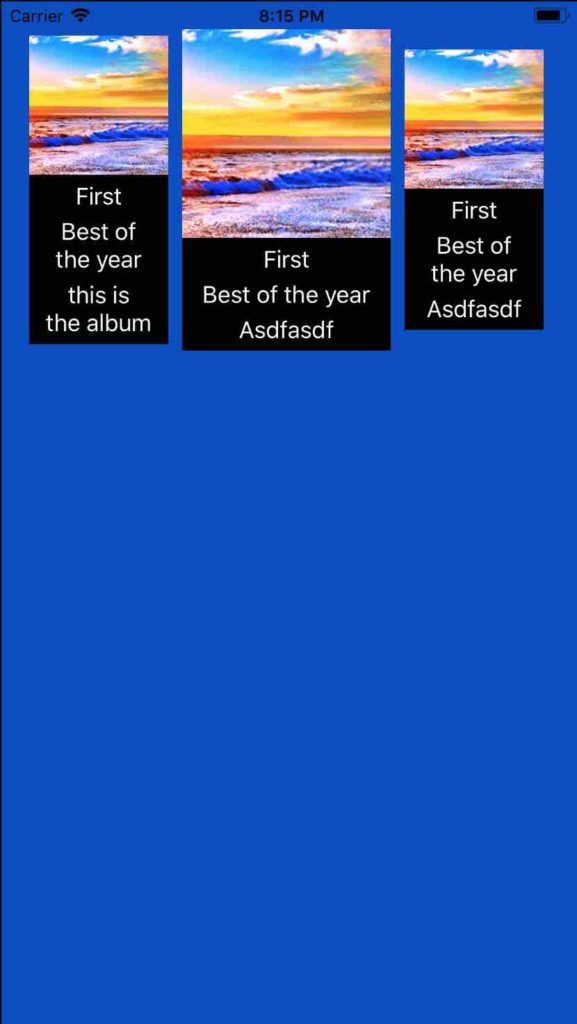 Now that the basic functionality is covered, let’s dive in to the good stuff!

To get any part of your application to run in the playground you need to create a framework. That framework needs to have all necessary files included to it’s target. Also you need to create a playground file and add it to the project. As already mentioned the interfaces that are used via the created framework needs to be public. You can check the necessary steps in more details in my previous post: How to run your application in Swift playground. Today I assume we have the playground, framework and all the files added to the correct target.

We don’t want to use any real data fetched over network, so we need a way to replace it when using swift playgrounds. We need to create a new module that conforms to the AppServerClientProtocol. When we include the swift playgrounds file to the project also Sources and Resources folders appears under it. Now we need to create a new file named PlaygroundAppServer and make it to conform to the AppServerClientProtocol. 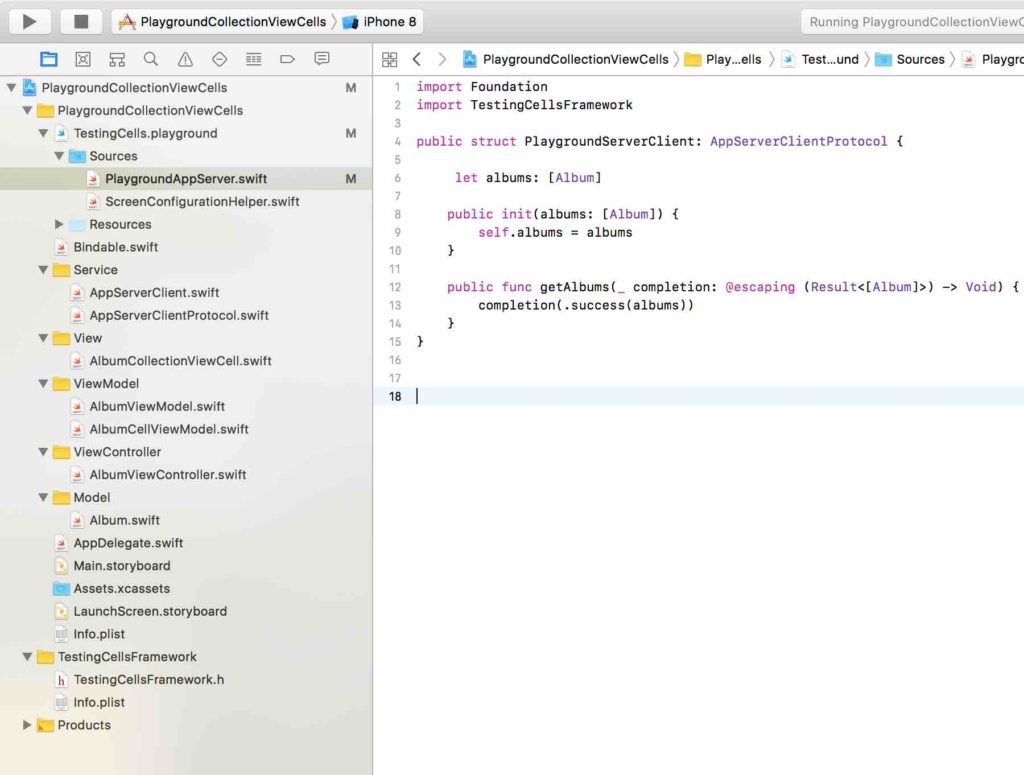 PlaygroundAppServer has one variable named albums. We can provide this data when creating an instance of the object and control what kind of cells will be created. Also notice that the TestingCellsFramework is included in the import statement. Otherwise the file wouldn’t know about the AppServerClientProtocol.

Create AlbumsViewController in the playground and present the wanted data

Again at the top of the file let’s import TestingCellsFramework. After that we’ll create the albums that we want to present on the screen. Then when creating the playgroundAppServerClient we give the albums as parameter. Next, we’ll use some dependency injection magic and replace the actual implementation in the AlbumsViewModel with the mock version we just created.

When we run the playgound the result looks like this.

The great thing about this is that we can check how the cells look with different data by just adding more text to the dummy cells inside the album array. The change takes maybe 2 seconds to load and the result is visible.

I’ll show you one last thing before we wrap up. Let’s check how we can test the different resolutions and portrait vs landscape modes!

This idea I got from the kick starter app. I watched one of their swift talk episodes where they talked about playground driven development. They used a helper class to provide different screen sizes, orientations, size classes and trait collection. I encourage you to check the episode to learn more about playground and how to build UI in the code. I made this helper class a bit simpler and you can only change screen size and orientation.

So first let’s create a new file in the playground source folder. I named the file ScreenConfigurationHelper. In the file you can see the enumerations for orientation and different iPhone screens.

Now all we need to do is to give the view controller as parameter with wanted configurations to see how the view behaves with that setup. For example, to see iPhone8 in landscape mode replace the last line in playground file with this line of code: 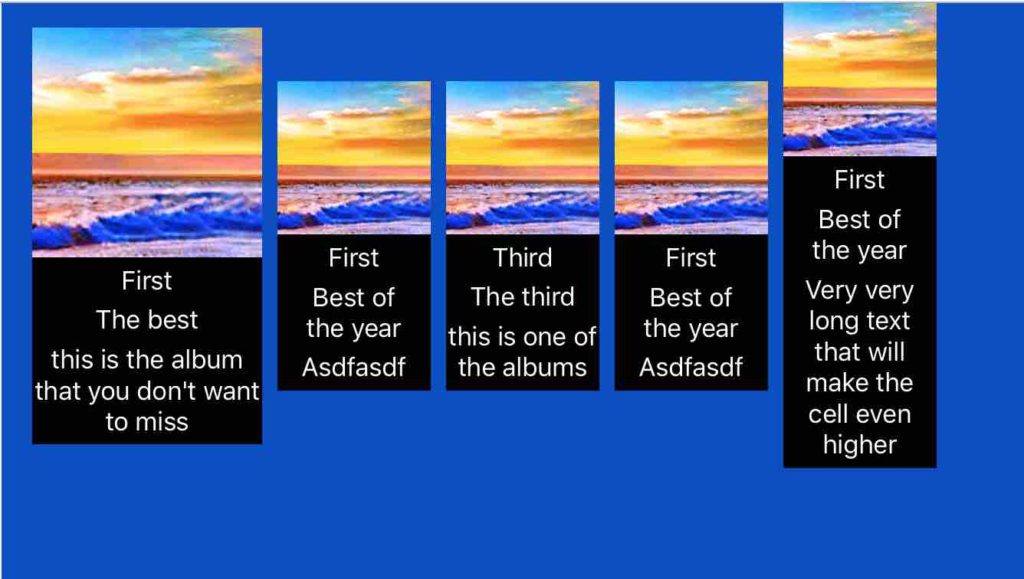 Testing the UI in playground can be a helpful technique. Setting up the playground, framework and making the interfaces public can take a bit time the first time you are doing it, but after that it becomes pretty easy. You also have to design your code so that parts of it can be replaced with components that you create in the swift playgrounds side (for example PlaygroundServerClient). Usually that is something that you would do anyway, because you also want to unit test your application.

The biggest problem I had when setting things up was that swift playgrounds are pretty unstable. Every time I open the project it first complains about:

Playground error when opening the project

I’ll definitely continue testing how to use playgrounds to help with UI development. It would be great to also make it support localisations, so that you could easily check how different texts fit to your UI. I would really like to hear how you have used swift playgrounds in development? Any tips that you can share with me? Anyway this post is getting a bit longer than I intended so it’s time for me to thank you for reading, and I also want to wish you a great day my friend!