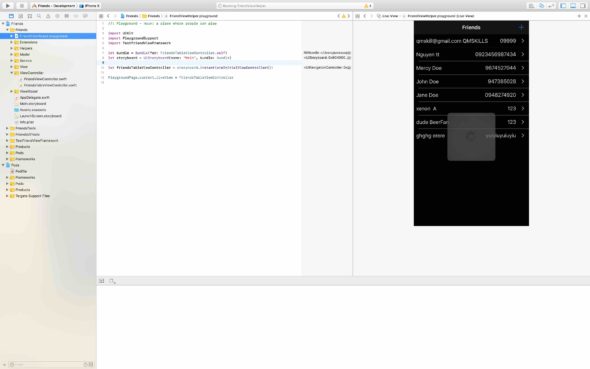 I’ve been playing around with Swift playground lately and today I want to share with you, how you can run your complete project inside a Swift playground. I got the idea when I was constructing cells with dynamic height for UICollectionView. After a while I was a little bit frustrated to always test the changes on simulator. I wanted to see the changes right away with any kind of data. So I started experimenting. I always design my UI using storyboard or xib so my goal was to open the view controller inside Swift playground and see the changes. So the first goal was to show any view controller inside Swift playground. I was a bit surprised that the end result was that I had my complete project running on playground, with networking and everything. In this article I’ll go through the steps how to do this.

If you are interested in testing a single view in playground with all resolutions and orientations, you should also check my post How to use Swift playgrounds to help with UI development.

How to run your project in Swift playground

In this article I am once again using the good old Friends project. The project is basically a CRUD implemented using MVVM architecture and it communicates with a backend implemented with Vapor using Swift. Checkout the blog post MVVM pattern with Swift for more information.

The steps to run your project inside Swift playground is:

Create Swift playground file and add it to your project 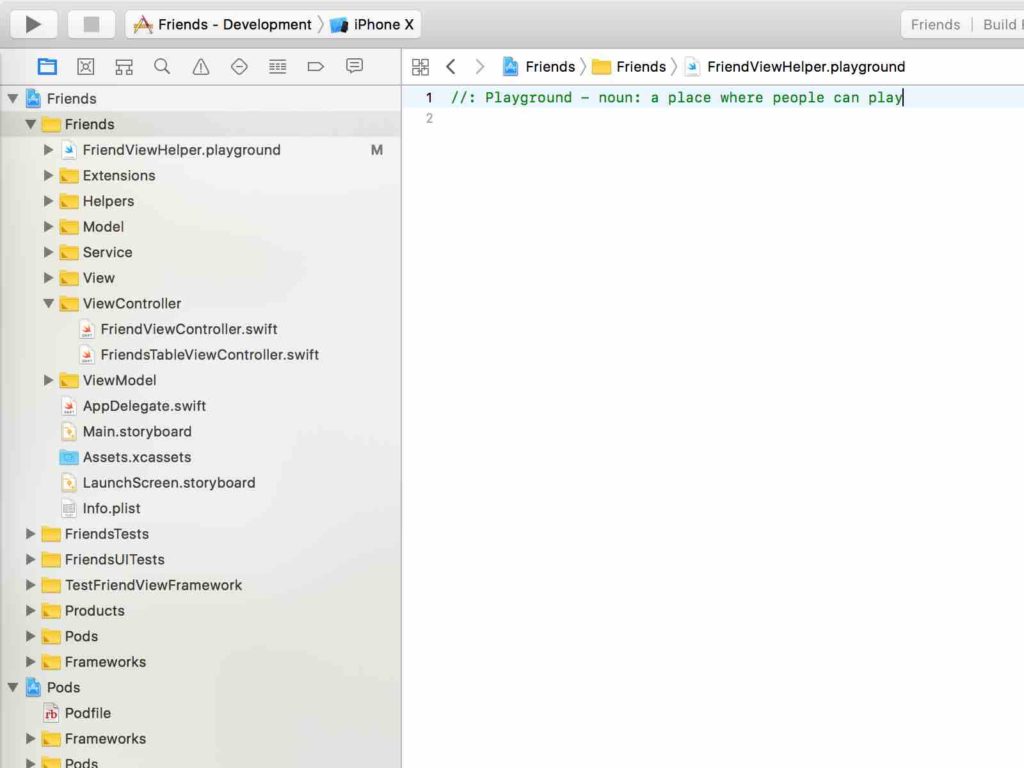 Create a new framework for your project

The framework works as a framework to load the components from your project. Now that’s a nice looking sentence :). To create a new framework we need to open the project file and select the small plus button at the bottom of the image right below the TARGETS. Then we need to scroll down the list and select the Cocoa Touch Framework. After we have given it a name, it will appear in the TARGETS list. I named mine to TestFriendViewFramework 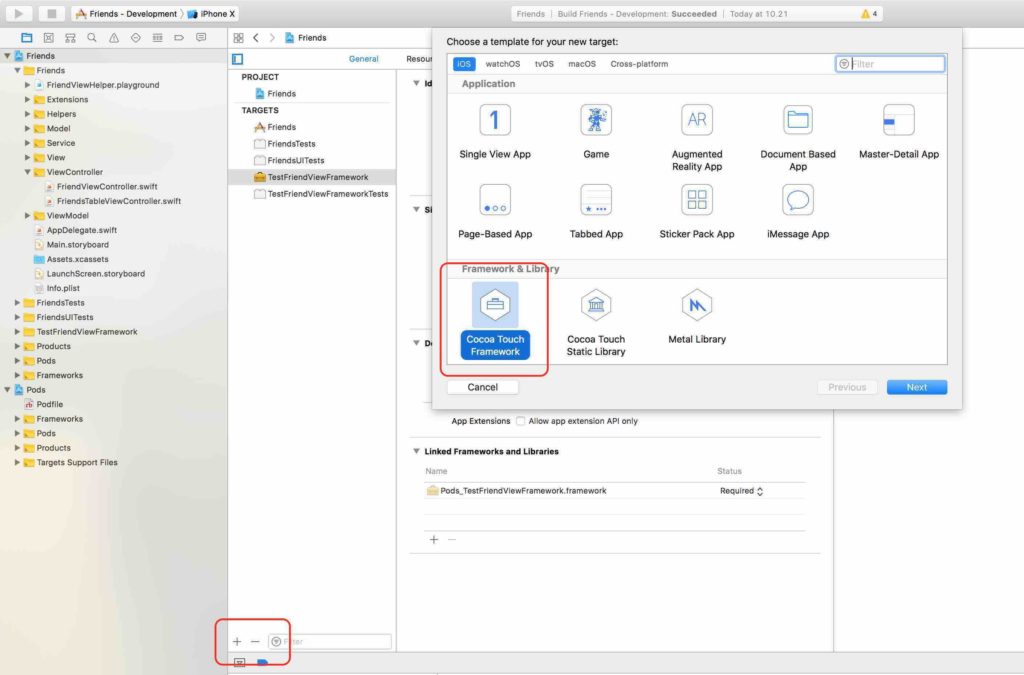 Since we are running the whole project in the Swift playground. We need to add all the wanted files the new TestFriendViewFramework target. Including the storyboard and xib-files we might have. This is accomplished by selecting a file, and then selecting the checkbox on the right side of Xcode in front of the TestFriendViewFrameWork. See the image below. 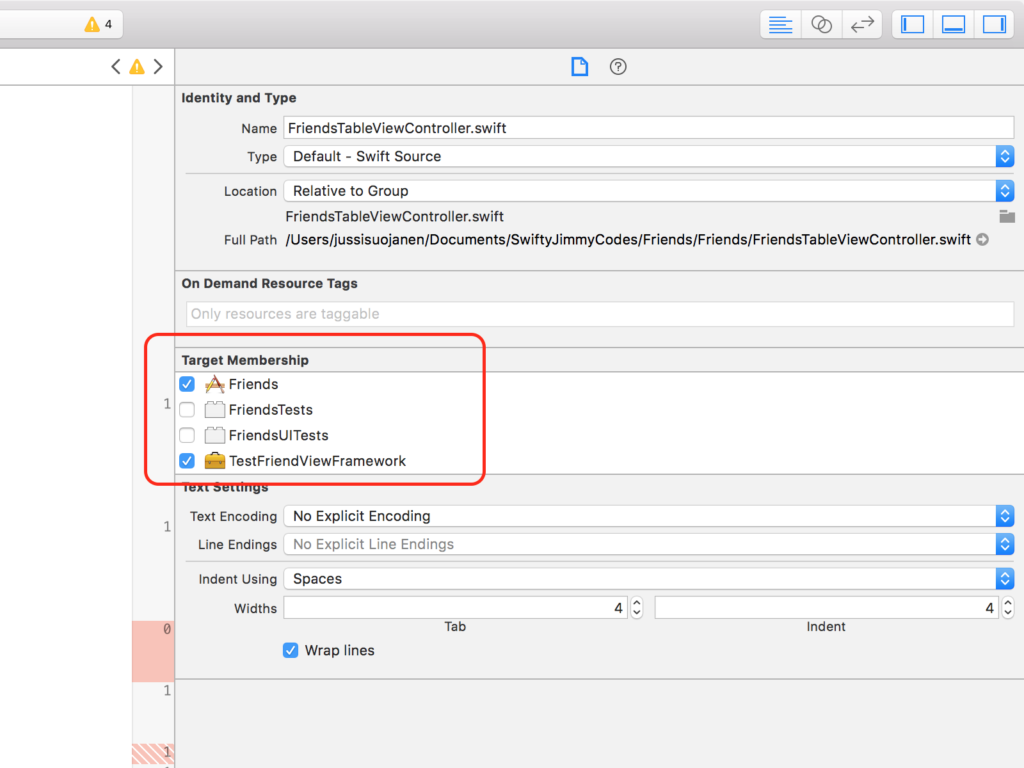 That is actually all we need to do for the framework (except for the cocoa pods library). Just remember to compile the framework every time you make changes to the files. If you forget to do this, the changes won’t be available through the framework. Now if you compile the project you’ll notice that it complains about the missing pods. In Friends project the first issue is PKHUD and the next one Alamofire. Let’s fix them!

Add pods to the new framework

To add Alamofire & PKHUD  libraries to the new target we need to add these lines to the Podfile:

The target is the previously created TestFriendViewFramework and the lines inside the target block are just copied from the normal pod install definitions. Now all we need to do is to run “pod install” in the command line. After closing and opening the project again, we can start modifying the Swift playground file.

Load and present the wanted view in Swift playground

Let’s open the FriendViewHelper playground file which should still be empty at this point. First thing to do is to import the TestFriendViewFramework. We also have to import UIKit and PlaygroundSupport so we add the following 3 lines at the top of the playground.

Next let’s create a bundle with FriendsTableViewController type which is the view controller that we want to load from the storyboard.

Create a bundle with FriendsTableViewController
Swift

After adding this line you should see an error when playground tries to run the code:

Error message in the console

After we added the public keywords and compiled the framework, the playground file does not complain about the unresolved identifiers anymore. Btw, sometimes when working with playgrounds the code changes does not seem to take effect even if you save the file. I’ve noticed that commenting and uncommenting a line of code is sometimes the key to get rid of an error. This happened again when I was writing this post.

Now, all we have left is to create the storyboard, load the initial view controller and set it as the liveView for the playground.

First, construct the storyboard and give the previously created bundle as a parameter. Next, since FriendsTableViewController UI is defined in the Main storyboard and it is the initial view controller, we can instantiate it with instantiateInitiaViewController(). It returns an optional but let’s force unwrap it here. We will not use the code in production so the force unwrapping is ok.

Swift playground has a defined liveview which we can use to set the view controller visible. In the last line we set the friendsTableViewController  as the current live view for the playground. Incase you are not seeing the view controller, just press “Alt + Cmd + Enter” or select “View -> Assistant Editor -> Show assistant editor” and you will see your project running. 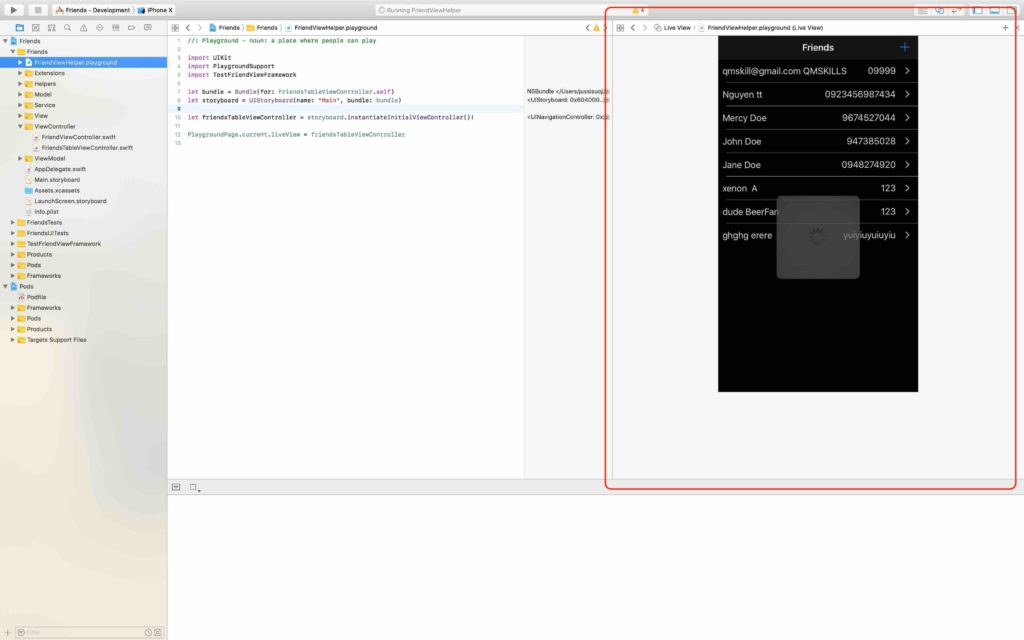 The process it self was very easy. Create a playground -> create a framework -> add your files to the framework -> install pods to the target -> make the UIViewController interface public -> load the view to playground live view. As said I was a bit surprised to see the whole project running inside a Swift playground. The goal was only to load specific view and then see the possible changes done to UI immediately, without running the code in simulator. I was pretty excited to see that Swift playground can also use networking and that the whole project can run it. So excited that I wanted to write a blog post about it. Looking back it seems so obvious, but I just hadn’t thought of it before seeing it in action :).

Next time I’ll continue with Swift playground theme. We will see if and how playground can help to construct your views inside storyboard view controller. Goal is still the same to apply Swift playground with UICollectionView and see how different kind of cells behave with dynamic content, in all resolutions and orientations. You can read the post here.

Thanks for reading and have a great day my friend!

This article has 4 comments